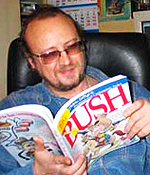 Alexander Zudin was born in 1960 in Siberia and currently lives in Saint Petersburg. In 1982, he graduated from the College of Architecture with a PhD in architecture. He taught architectural design at Saint-Petersburg State University of Architecture and Engineering. In 1991, he began to draw and publish cartoons in newspapers in Moscow and Saint Petersburg. Since 1998 he has been drawing cartoons and illustrations for the Russian social and political periodical Obshaya gazeta (Common newspaper). He organized Cartoon.ru, the first Russian political cartoon site to reflect on the issues of the day.  See more of Alexander Zudin’s work at Cagle Cartoons. - See more at: http://earthdesk.blogs.pace.edu/tag/alexander-zudin/#sthash.zJZtMxtV.dpuf