CARTOONS FROM CROATIA IN BELGIUM/2015

CARTOONS FROM CROATIA IN BELGIUM

the Croatian cartoon in the world. Ever since the beginning the Croatian Cartoonist Association has

been a member of the international cartoonist association FECO. With Belgium, the Netherlands and

England, Croatian cartoonists were co-founders of this international association.

By participating in many festivals around the world, a lot of their members have won numerous

prizes. Over the last few years they have organized Croatian cartoon exhibitions in Norway, France,

Turkey Austria and Slovenia. So now in Kruishoutem (Belgium), with works of some 30 Croatian

... These exhibitions, as well as the overall work of the Association, would not be possible without the

financial support of the Ministry of Culture and the City Zagreb.

More info on the Croatian Cartoonist Association you can find on their website www.hdk.hr 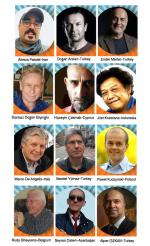