Skopje / MACEDONIAApril 30, 2019The organizer of the competi ti on is OSTEN Skopje, Republic of Macedonia• The SELECTOR assigned by the organizer will select the submitt ed works, and the INTERNATIONAL JURY will appraise the short-listed works.• The offi cial announcement of the awards and the opening of the exhibiti on will take place on 26th September 2019 at the Nati onal Gallery of Macedonia in Skopje. CRITERIA• The following categories of original works will be considered: cartoons, sati rical drawing, comic/strip (up to one panel of non-linguisti c strip)• Theme | technique | format – by the author’s choice• Number of works – unlimited SUBMISSION• In principle, ORIGINAL, hand-drawn works are expected. Only if the author works exclusively in digital technique, printed DIGITAL WORKS numbered and signed in pencil on the front will be considered * Note: only original works will be considered for the OSTEN Museum of Drawing• The ORIGINAL WORKS by the cartoonists from newer producti on, which have not previously been published or awarded, will be considered. Cartoons that are deemed by the jury to be identi cal or closely similar to the known works by another author - will NOT be judged. * Note: according to the organizer’s directi ons, the selector and the internati onal jury will pay parti cular att enti on to the visual expression of the submitt ed works• Regular applicant should: - fi ll out this Applicati on Form (electronically or manually) and send it to the e-mail: This email address is being protected from spambots. You need JavaScript enabled to view it.
along with a photo and short bio of the author - to send the works by post mail along with the printed Applicati on Form * Note: the name of the author, the ti tle of the work and the technique should be stated on the back of each work.• By completi ng the applicati on, the author gives to the organizer a non-exclusive right to use, exhibit, study and publish his works for the needs of the event. For selecti on will be considered the works that will arriveunti l 30th April 2019 to the address:OSTEN – WORLD GALLERY ON CARTOONS8 Udarna Brigada 2, 1000Skopje, Macedonia IMPORTANT!!!When sending the works, make sure to write on the package:NOT FOR COMMERCIAL PURPOSES, FOR EXHIBITION ONLY!!! SUBMISSION FEEYou should choose one of the opti ons below:- To parti cipate without Submission Fee (the submitt ed works remain in the OSTEN Collecti on)- To parti cipate with a 40 $ Fee (unselected works are returned to the author) PAYMENT INFORMATIONThe payment should be done via money transfer to the OSTEN Skopje account:Benefi ciary: OSTEN DOOEL SKOPJE, 8 Udarna Brigada 2, Skopje 1000, MacedoniaIBAN: MK07210701000702188 | SWIFT: TUTNMK22Bank: NLB AD SKOPJE, Majka Tereza 1, Skopje 1000, Macedonia AWARDSGRAND PRIX for LIFETIME ACHIEVEMENT (1500 $)FIRST AWARD (1000 $)SECOND AWARD (500 $)5 THIRD AWARDS (Plaque)5 GOLDEN OSTEN AWARDS (Plaque)CICO AWARD * for a Macedonian Cartoonist (Plaque)* In honor of the great Macedonian cartoonist Vasilije Popovic – Cico SELECTION AND JUDGING• The SELECTOR makes short-list of the AUTHORS who will go to the next level of judging with all submitt ed works• The JURY MEMBERS review the works of the selected authors, choose the work that will be presented in the catalog and decide on the awards envisaged by the organizer The organizer will noti fy all registered cartoonists about the results of the selecti on (unti l the end of May 2019) and the jury decision (by the end of June 2019) by email and will publish the results on itsWebsite: osten.mk PRESENTATION• The awarded and selected works will be exhibited at the Nati onal Gallery of Macedonia from 26th September to 16th October 2019• In the same ti me (from 26th September to 16th October 2019) a joint exhibiti on of the FINALISTS that were in the closest competi ti on for the GRAND PRIX will take place at the OSTEN Gallery• For the award-winning authors and Grand Prix fi nalists who will be present in Skopje during the opening of the exhibiti on and presentati on awards ceremony, OSTEN will produce print portf olios of their works• The awarded authors receive appropriate Certi fi cates and printed copy of the catalog via post mail. Their works remain in the OSTEN Collecti on• All others receive appropriate Certi fi cates and catalog in .pdf via e-mail. The ones, who would like to have the Certi fi cate / catalog in hard copy, can order it for a price of 30 $ and they will be sent to the appointed address by registered post mail.• The organizer invites all parti cipants to att end the opening of the exhibiti on and presentati on awards ceremony on 26th September 2019 in Skopje, and for the award-winning authors announcing their arrival by 1st July 2019 provides 3-nights accommodati on. 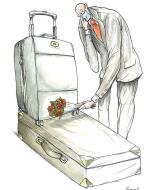