He has been The Graphic designer for the "Ravy" a periodical

for the Isfahan Cartoon Association from the

magazines from the year 1998 with the "Roshd" magazines

and the "School" publications and till now he has

Illustrated many books for other publishers.

He started drawing Cartoons and Caricatures from the year 1996

in the “Kanoon Caricature Esfahan”.

Ali Hashemi has participated in many National and International

His cartoons have been printed in many Art catalogs in Iran and abroad.

He has won some Prizes during these years of cartooning:

The First Prize of the "National Police Cartoon Contest" 2001

The Second Prize of the "National Passage Cartoon Festival" 2002

Honorable Prize of the "National Cartoon contest in Kashan" 2002 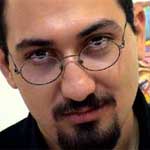