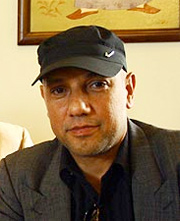 The Havana-born Ares is a cartoonist and self-taught painter who draws regularly for clients in Cuba and Mexico. His cartoons are syndicated internationally by Cagle Cartoons.

EMAIL This email address is being protected from spambots. You need JavaScript enabled to view it.

Ares was born in Havana, Cuba on September 2, 1963. His education included the study of medicine (Graduated in 1987) and psychiatry (Graduated in 1993). His first cartoon was published in 1984

Ares has made oil paintings and animated films; he currently works in Havana as a freelance artist and illustrator (mainly children’s books). His works have been published around the world.

He has illustrated more than sixty books and has worked in TV and film with some of his works being used to make short animated films (Filminutos).

He has given lectures on the subject of cartoon and comic art in Cuba, Iran, Mexico, Colombia, Turkey, Canada, Spain, Venezuela and Finland and has served as a judge in a number of international cartoon contests in Mexico, Italy, Brazil, Turkey, Cuba, Iran ...