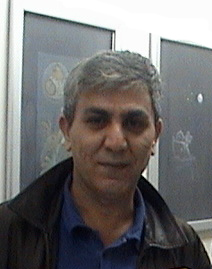 He has been working as an art director in the press and publishing sector since 1981.

He designed several books and book covers, catalogues, brochures, and magazines, painted books and did cartoons for many periodicals during his career of 29 years.
His cartoons are selected and published in catalogues of  Montreal, Umoristi a moristica and Gabrovo cartoon contests, was given prizes in others and he judged some cartoon competitions as well.

Yavuzdo?an lived in Northern Cyprus between 1989-1994 where he was employed for KIBRIS newspaper as the art director and vice-editor-in-chief, also editing the humour page in the weekend supplement.

Still, in 2007, he had the exhibition of his cartoons titled "?yi, kötü ve çirkin" (The Good, the Bad, and the Ugly) in Istanbul.

Yavuzdo?an published a literary magazine between 2007-2010.

After retiring from Milliyet newspaper in 2008, Aziz Yavuzdo?an is a free-lancer now, also the Secretary of the Association of Cartoonists in Turkey (Karikatürcüler Derne?i) for the 5th year in 2010, and running his private publishing company called Eskiay Yay?nc?l?k, too.