Bretislav Kovarik was born 26. February 1950 in Pardubice. As a graduate of the Faculty in Hradec Králové (1972) was the original occupation, a primary school teacher. Then he worked as a teacher, truck driver, driving instructor, the head of the Department of the House of culture, programming tutor night watchman and then followed by a liberal profession (since 1991). Admiration to the cartoon as a genre it aroused a wave of new publicistickému the authors of the cartoon humor in what was then Czechoslovakia, who began to publish in over a short period of democratisation of society in 1968. The first attempts to own the production started in 1975, his first drawing was published in Brno "Equality" in 1977. Gradually began to cooperate with many Czech (československými) periodikami and foreign agencies. For their creation has earned a number of awards in national and international competitions. In addition to the comic and cartoon art as well is dedicated to the humore portrait of another activity. Břetislav Kovařík is Chairman of the Czech Union cartoonists since 1999. In the years 1996 – 2008 was a co-organiser of the international biennial cartoon competition humore HUMOREST Hradec Králové. Lives and works in Trutnove in the Czech Republic. 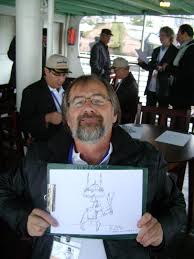