(born 1 June 1936 in London) is an English cartoonist and illustrator whose work is characterised by an apparent obsession with the grotesque and diseased, perhaps a result of an asthmatic, bed-ridden childhood.
Scarfe studied art at East Ham Technical College in the early 60s, alongside Ralph Steadman, whose artwork holds many similarities to Scarfe's in style, subject matter, and humor. Scarfe and Steadman became estranged in the mid 1960s after Scarfe was hired by the Daily Mail. Soon after, Steadman was commissioned to illustrate Scarfe and produced an image that was half saint and half Superman, but with a disconnected heart.
His early caricatures of public figures were published in satirical magazine Private Eye throughout the 1960s and 1970s.
He is perhaps best known through his work with rock group Pink Floyd. His first work for them was a set of animated short clips used on the Wish You Were Here tour, including a full-length music video for the song "Welcome to the Machine." He also drew the cover illustration for their 1979 album The Wall, and in 1982 worked on the animated sequences for the film version of the album. He continued to work with Roger Waters when the latter left Pink Floyd, creating the graphics and animation for Waters' solo album The Pros And Cons Of Hitch Hiking (1984) and its supporting tour.
He provided caricatures of Paul Eddington, Nigel Hawthorne and Derek Fowlds (as their respective characters) for the opening and closing sequences of Yes Minister and Yes, Prime Minister. Derek Fowlds reportedly attempted to purchase Scarfe's original sketches, only they were too expensive.
In 1971 he met Jane Asher, with whom he had a daughter in 1974. They married in 1981, and had another two sons in 1981 and 1984.
In 1997, Scarfe worked on the Disney film Hercules as a conceptual character artist, and his designs were widely acclaimed.
He presently draws editorial cartoons for the British newspaper, The Sunday Times, a position he has held off-and-on since the early 1960s. His cartoons occasionally appear in the prestigious American weekly The New Yorker. 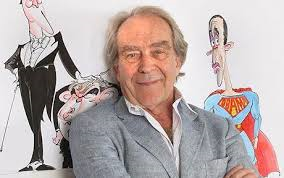