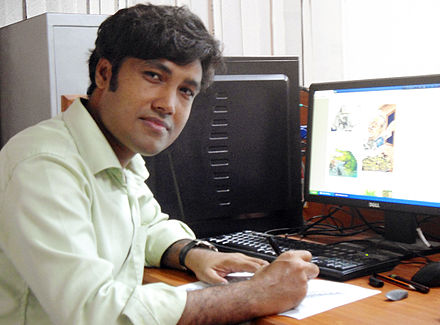 Khalil Rahman was born in 1983 and grew up in a small village in Jhenidah district of Bangladesh. He has had a great passion for drawing since childhood. He used to draw what he saw around him. His mathematics notebooks would be full of drawing. His school teachers and many others appreciated seeing his artwork.

Even though very few newspapers would reach where he used to live, because the location was far away from the district town, he was introduced to a national daily newspaper when he admitted to high school. He would read the newspaper and never miss seeing the cartoons. He was inspired to draw cartoons, because of those comic strips.

Khalil would also try to draw comic strip and send them to newspapers and interestingly some of those were published. Since then, Khalil has been drawing cartoons for the national dailies. He started his career as a political cartoonist in The New Nation, an English daily newspaper, in 2003 while studying at university. He worked for the newspaper two years before moving on to be a cartoonist for The Daily Inqilab.

Since his early career days, his political cartoons have carried strong messages. For his thought provoking cartoons that have been appearing on the front page of the leading daily newspapers for over a decade, he has become one of the most popular political cartoonists in Bangladesh. His work has found its due place through well-deserved recognition and acknowledgment among the regular readers and among the politicians and intelligentsia.

email :This email address is being protected from spambots. You need JavaScript enabled to view it.