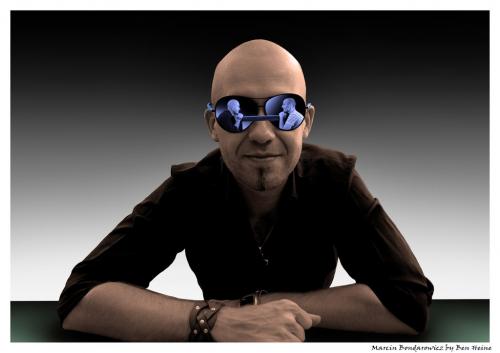 MARCIN BONDAROWICZ is a professional Polish cartoonist and illustrator.
He is also a specialized painter and photographer. He was born in 1976 in Starachowice, Poland. He lives now in Poland as a freelance artist. He regularly publishes his cartoons on several Websites and collaborates with a wide range of magazines and newspapers.
Marcin Bondarowicz masters traditional techniques ( such as oil and acrylic painting, pencil drawing ...) and digital graphic technologies ( such as digital manipulations ...).
Marcin used to be a journalist, a position that gave him a critical eye to the world events and brought obvious social and political connotations to some of his creations.

Nevertheless, without denying the strong correlation with this institution, Marcin adds his own perception of the world, mixing surrealist, anthropomorphic and organicgraphic ingredients with anachronistic references.

It is not only the very significant manual skills and proficiency of Marcin Bondarowicz that make his art so particular but also the strength of the character of the artist. Most of his paintings deal with private events of his life and with his personal artistic evolution, while also generating anintimate horizontal dialogue with the spectator. One could say that his workis highly individual and autobiographical but also universal, in the sense that its metaphoric content and existentialist message concern us all.

A wide number of Marcin's artworks can be found in private collectionsin Poland and in foreign countries. Permanent exhibition of his illustrations and posters can be viewed on his  WEBSITE
•

The Instytut of Technology in Radom: Poland
[ masters degree in graphic design and painting ]

• PORTRAITOF POLES AFTER 20 YEARS OFFREEDOM II Forumof Young Caricaturists Organisers of the competion: The Museum of Caricature in Warsaw and SPAK (The Association of Polish Caricaturists) Honourable patronage: The Minister of Culture and the National Heritage [Warsaw - 2009] - One of FIVE EQUIVALENT PRIZES