He was born in the year 1945 in Larestan,Iran.
For more than 30 years, He has cooperated with many
journals and magazines as a cartoonist and journalist.
He has worked as a cartoonist and a member of the editorial
board in the monthly humor magazine "Fokahyoun"
and he has also been a cartoonist and chief-in editor assistant
of the "Khorjin" humor magazine, two of the oldest humor and
cartoons magazines in Iran.
He has served as a cartoonist in the "hezar Ghesse" Magazine,
"Cartoon" Magazine and "Abrar" daily newspaper,
some Children's magazines and "Golagha" magazine which
he is lately a member of its editorial board.
He is also a member of cartoon the editorial board of "Kayhan Caricature"
monthly cartoon magazine.
He has published thousands of research articles about
cartoons and satire in humor magazines and books in Iran and abroad.
Jury:
He has been a member of the selection board in most of the Tehran
International Cartoon Biennials.
He has been a member of the Jury panel of the second International
Cartoon contest "Palestinian are homeless"-2003. 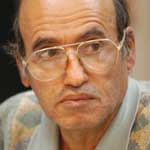