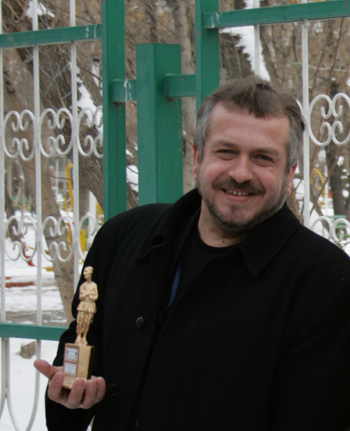 I was born on the 21st of February in 1964 in the Ukraine. In 1983 graduated from Kirovograd machine-building technical school and in 1994 – from Kiev National University (the faculty of journalism). In 1987 my cartoon was published in media for the first time. Later my works appeared in such mass publications as Perets (Ukraine); Vozhyk, Picnic, Shapokliak, 15 Sutok, Kalambur, Odin Doma (Belarus); Krokodil, Chaian (Russia); and also in many other newspapers and magazines. I am a member of the Journalists’ National Union of the Ukraine since 1989. In 2001 I also became a member of the Belarusian Journalists’ Association. In 2004 joined the Catoonists’ Association of the Ukraine. In 1991 I published my first book of chosen cartoons intitled “Black Humour”. In 1997 my second humorous book “Cartoons” was printed. In 2004 some of my works were included into the book “Cartoonists of the Ukraine”, and in 2006 I participated in creation of the book “Anthology of Belarusian Cartoon”.

I have taken part in more than 400 international cartoon contests and exhibitions since 1998.

The Person of the Ukraine.

e-mail: This email address is being protected from spambots. You need JavaScript enabled to view it.