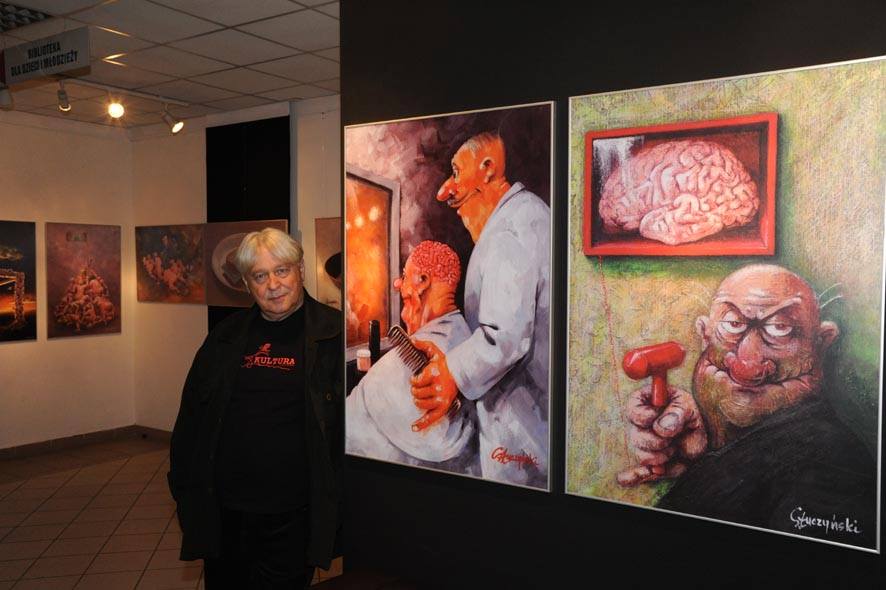 Slawomir Luczynski was born on 9th November 1953 in Pabianice, Poland. From 1976-1988 he worked in various companies in Pabianice. Actively involved in the resistance movement against the Communist regime – in the years 1982-1983 he cooperated with the underground publishers Pro Patria, for which he made drawings and linocuts for underground papers, publications, leaflets and posters. In the years 1988-1991 he worked as a graphic designer in the newspaper “The Warta” Sieradz since 1991 in the weekly “Nowe Życie Pabianice”. Since 1989 he is a member of the Association of Polish Cartoonists SPAK, 1999-2005 member of the Board and currently he is the Vice-President of SPAK. Slawomir Luczynski is the first Polish cartoonist, who won 100 awards in various cartoon competitions around the world (eg Italy, Belgium, Japan, rgentina, China, Turkey, Taiwan, …). For his artistic accomplishments honoured him SPAK prestigious prize the Little Eryk (1998, 2000), and the Great Eryk (2002). In 2001 Polish Minister of Culture and National Heritage awarded him the Badge for Meritorious service for the culture. He has been granted Medal of Polish independence and human rights (2001). Slawomir Luczynski presented his creative work at more than 131 individual exhibitions and participated in countless collective presentations at almost all continents. His drawings have been published in many newspapers and magazines at home and abroad. His artworks can be found in numerous books, such as “Polish cartoonist”, “Polish cartoon portraits”, “Panorama of Polish literature of the 20th century” (published in Zurich), and many others. The largest collection of his artworks can be found in the Museum of Contemporary History in Paris, France. Slawomir Luczynski lives and works in Pabianice in Poland.